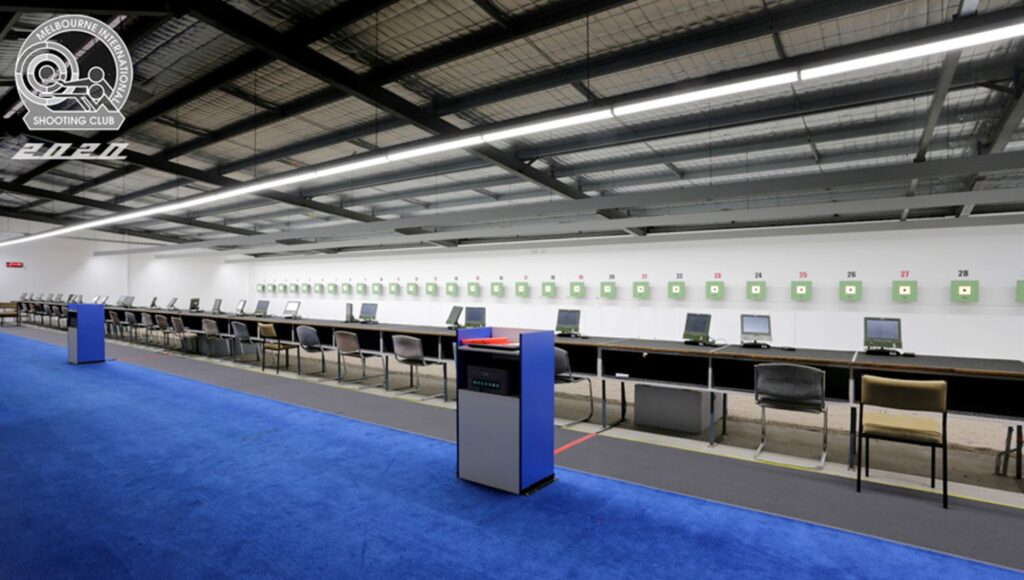 In 1996 the Essendon Smallbore Rifle Club & MISC came to an agreement for Essendon members to join MISC en masse. Essendon had lost their range in Ascot Vale to a fire in late 1986 and were looking for a permanent base.

At the time, the club’s air range did not exist. Air gun shooting involved MISC members setting up targets in the clubroom along what is now the trophy wall on air shooting nights.

At about the same time as the fire decimated the Essendon range, Kim Frazer, who had been using the MISC 50M range to train for the 1994 Commonwealth Games since 1993, started advocating for discussions between MISC and Target Rifle Victoria (then known as the VSBRA) to create a mutually beneficial arrangement between the two organisations.

The Essendon records show that at an SGM in Feb 1996 the club approved an amount of $40K to assist with the building of the Air Range with the proviso that the VSBRA also contributed $40K. VSBRA held an SGM in March 1996 and all the club delegates voted to support the proposal except one club. Essendon moved its shooting program to MISC’s premises sometime after June 1996.

With an anticipated increase in air shooting requirements from its own members, the arrangement with TRV and the influx of Essendon members, the MISC committee under the leadership of Tibor Gonczol (former President) agreed to progress the plan to construct a 10M Air Gun Range on the eastern side of the club where it sits today. The construction of the air range was an important milestone for the club, as it was one of the factors that enabled the club to apply to be a host venue for the 2006 Commonwealth Games Rifle & Pistol events.

Construction commenced in late 1996 & concluded in 1997. Reg McCready recalls: ”a working bee to set up the reinforcing for the range floor was on the hottest two days of the summer”. The finished air range featured 27 Rika returning targets and two Running Target systems. Several MISC members were involved in the construction, but most notably former member Jose Iglesias whose company undertook the construction work and life member Alex Slifka (dec) who completed all the electrical work.

The range was officially opened on 12th April 1997 by the Minister for Sport, The Honourable Tom Reynolds MLA who remained a Patron and advocate for MISC until his retirement to Queensland.

A valuation was placed on the range prior to the Commonwealth Games of $384K for insurance purposes (the current original cost on our books) and some minor improvements were made to the range to meet the requirements of that event. However, the actual cost of the build in 1997 was about one-third of that since a significant amount of work was arranged at cost or through volunteers. Reg recalls being told that the company who provided the steel work supplied it at about cost and then sent the riggers to erect the steel work at no charge. This comes as no surprise to the author since Tibor was a master negotiator whose tireless efforts brought significant development to the club – often at cost price or less.

Not long after the Commonwealth Games, Graham Parkin organised the installation of the blue carpet on the range which the club had received courtesy of Reg McCready[1]. Until that time the carpet had been stored rolled up on the 50M range while the club considered where best to install it.

With running target being dropped from the Olympic program after the 2004 Olympic Games, the running target area of the range remained unused for 10 years. While some discussion had occurred on reconfiguring this area for various purposes, it wasn’t until 2014 that Paris Kechayas and Reg McCready commenced preparing an application for a government grant of $100,000 to upgrade the air range with electronic targets. When planning for the works began in earnest they were joined by David Telfer and Johan Fantenberg who provided technical and construction expertise. The grant application was approved by the State Government’s Sport & Recreation department in 2015 and an SGM endorsed the additional expenditure of $50,000 by the club which was required to implement the project and which was part of the agreement with the government. However, the change in the committee which had occurred just prior to the SGM resulted in some delays while the new committee familiarised itself with the project and the government grants process.

Eventually, in 2017 work commenced on the installation of 29 Sius Ascor Electronic targets, removal of the running target range area and re-installation of 5 of the original Rika air targets in place of the old running target range. A Sius Ascor technician arrived on site to assist with set up of the targets and David Telfer was instrumental in completing much of the construction work involved.

Today’s air range is an area where many members fire their first shots at MISC and it is an important training facility for all shooters to hone their skills.

[1] The carpet was surplus from a renovation at Tullamarine Airport Terminal and had been donated to the club.

Members will need to use their membership number to log in to gain access to the club calendar and booking system.

Thank you for your upload